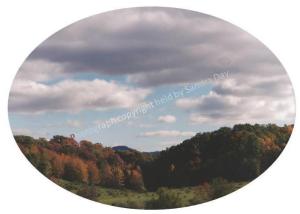 A whiteout! This was something I had only heard of, but never seen. This surely was what was being described when people mentioned snow falling so thick and fast that you could not see. I had given my word to deliver something to a friend, and it didn’t occur to me that snow–even snow like this–released me from making the delivery. Walking out of my subdivision, seeing no one outside, nor any cars on the road, was a giant tip-off, but promises were sacred. Or so I thought. I had on a jacket, mittens, jeans and tennis shoes but no boots (who owned boots in my world?) It was probably a good thing, as I could still feel the edge of the pavement through the soles of the shoes. Crossing the intersection, for a moment I looked longingly at the church on the corner. It was probably opened and heated–I could rest for a few minutes and let my feet thaw. But that ended up being a passing thought, as the sky got darker and darker with snow. By now it was closing in on 4:00 pm, and definitely daylight was not far away!

The house where I was headed was another three-quarters of a mile, about 1 1/2 miles total. Then the walk back. I didn’t know if I would make it. The world was like nothing I had ever seen before, with almost no vision, but I was tenacious about making the delivery. Singing songs helped the steps to pass, walking to the beat, almost not feeling my feet anymore.

Having moved only a few months earlier from a warmer climate, it didn’t occur to me that my life was in danger. Not stupid, just ignorant of the ways of blizzards. Finally! The house came into view, and I made it to their porch. I knocked and knocked but no one answered. Oh, dear Lord, I prayed, what do I do now? I tucked the item safely between the screen and the front door, but there was nothing to do but turn around and head slowly back.

This time I decided I would step inside the church for a moment to thaw. Unfortunately, the walk, although not all that long had it been spring, had given the pastor time to lock the door, and my decision was made for me. I plodded on, not realizing how close to freezing to death I was getting. The thought of my mom worrying about me, possibly going out in the snow herself, kept me going, although all I wanted to do was lay down and build a snowbank around me, to try to keep out the driving flakes that were coming so thick and fast.

Home appeared half-way down the last street. Somehow, I made it to the door, and practically fell inside. It’s funny–although I can remember the walk, the blizzard, and all the pain, I have no recollection of anything once I crossed the threshold of my home. Subsequently, I had to deal with frostbite, but had I been in a marathon, I would have gotten a prize for keeping on “keeping on!”

The sermon at Thomas Road Baptist Church, located in Lynchburg, VA, continued this past Sunday with the series “Unfinished: Don’t Quit! Never Give Up!” Click on the link http://www.trbc.org/service-archive, and select the sermon for Sunday, October 9, 2016, preached by Dr. Ben Gutierrez. If you have time, worship with the congregation during the song service, or forward through until you reach the message. Be prepared to experience a powerful message encouraging us to continue when the going gets really tough! If you are doing the study by yourself, grab a notebook and take notes of your thoughts; if you have family or friends who can join you, discuss the questions below as you dig deeper into the section of Scripture Dr. Gutierrez preaches on. Above all, don’t let Satan defeat you, tell you life is hopeless, or ruin your peace and joy. He is a defeated enemy, and he knows it.

The temptation to quit is so very real when your circumstances have become over-whelming and there seems no way you will make it out. Have you kept on when you thought you couldn’t? Can you give an example, and write down or share the outcome?

This week we continue the series, “Unfinished.” Paul is very close to the end of his life, and desires that his last words encourage believers to never give up. If ever anyone had been in conditions where quitting would have seemed the best way out, it was he. Yet he knew that God would get him through, and heaven would be his reward. He pens instructions to all believers as to the importance of trusting that God will never leave our side, and will bring us safely through any storm.

Paul’s “Last Will and Testament”

“The Faith” is now established—Defend it and Live it!

Many people were giving up on God!

God has left many examples to look to when you need your faith to be strengthened (Hebrews, Chapter 11 for example). Not only is the Bible full of faithful men and women, but you have only to look at your own path to see He has been not just good, but Great and Mighty in taking care of you. Can you think of an example? Don’t forget to write it down.

When you are having the worst day possible, what happens when you sit down and absorb God’s word? What are some of the most comforting verses for you in the midst of crisis?

Even when you think God is not listening, or not working for your good, or when you don’t understand why so much is going wrong, He is still working out His plan for your life. How do you know this to be true?

Paul was no longer teaching precepts for believers to live by—now he was giving them the most important words he could leave with them. “Don’t quit, don’t stop trusting, don’t give up!” He had seen the rise of Christianity, had seen a vision of the risen Christ that so deeply affected him, that beatings, shipwreck, starvation, and other situations could not cause him to turn away from telling everyone about the love of Jesus. Now he was seeing them give up because of the tremendous hatred toward believers. Above all, his message to us today in the midst of an anti-Christian world, is “Don’t give up!” Pray for each other daily, pray for strength to endure trials and testing (verse 12). God will never fail you, never leave you, and you have His promise in His word that He will be bearing your burdens and helping you carry your load. Get in His word and absorb it, so that in times of crisis it will not cross your mind to leave the faith!

Extra Study this week: Read 1 Timothy to see how many times he mentioned those who were “falling away.” Hebrews  chapter 11 contains a list of people who lived and died, sometimes falling short but always coming back to God. It is a great encouragement to those who want to know that, with God, there are always second chances.