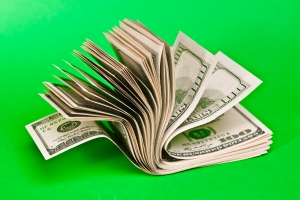 I entered the sanctuary, thinking (to my shame) that there was nothing I was going to learn during the next hour. I mean, really, how can you be married to a banker for a hundred years and not have heard everything about money that can be said? Or so I thought. I had gotten great at listening to the multitude of conversations with my husband as he told me loan request stories, the financial report stories, those to do with investing, stock graphs, dividends, ad nauseum, as I murmured a quiet “Oh, my!” or “Wow!” or just “Hmmm,” every few minutes while my mind was figuring out how I was going to decorate the hallway with new wallpaper. Budgets? Forget it, we had tried it and failed.

One thing about being married to someone in a profession where they serve the public is that requests for advice is a regular occurrence. It was quite often that someone would come up and ask if he could meet with them to discuss a financial situation. We considered this a good thing: it meant that God was using his knowledge of finances to benefit friends or family, and we considered it a ministry for him, outside of church commitments. One time he met with Joan and Barry (this was in another state, no one around here). They had been married for several years, had both been out of a previous marriage, and had been practically destitute of material goods; they had to start over at that time. Furniture, household goods, all the things that are taken for granted every day, had to be bought–which they had done with credit cards. Meanwhile, Barry was paying child support, and their outgo in those early years was more than $500 per month more than their income. They had decided to get their spiritual lives back in order, but tithing seemed an impossibility. By the time they sought my husband’s help, they were more than $65,000 in debt, and were getting ready to declare bankruptcy. Had they come in much earlier, he could have helped, but at that point it was almost like shooting a dead horse. Eventually, with his constant help, he did see them turn their lives around, and become debt free.

When Dave Ramsey came up to the platform at Thomas Road Baptist Church to begin speaking, from the first word he had my solid, undivided attention. Here was not only a motivational speaker, but someone who had been on top, been on the bottom, and probably every place in between. Those things I could relate to in a small way. But when he said that he made the decision to do it if it was in the Bible, or not do it if it wasn’t, he crossed the line into my box. I want to do God’s will, and the Bible is my guide. He had just become my brother and a mentor. He had given me a reason to listen to him.

My husband–who I thought knows everything that has a dollar sign in front of it–must have been as motivated as I, because, at the end of the service, he bought one of the Financial Peace University packets. We are both excited to see what God is going to do.

Grab you Bible, your notebook, and a cup of something hot, and get ready for a tremendous service from Thomas Road Baptist Church in Lynchburg, VA., that may change your life, depending on where you are with your finances. Click on http://www.trbc.org/sermons and hit the play button for Sunday, January 15, 2017. If you have a little extra time, listen to the congregational music, relating the words to your situation of debt. God will be so faithful as you commit your heart to Him, releasing you from the biggest debt you’ll ever carry: that of your sin. Start this FPU series with a life that has been turned over to the Creator, and have all your sins forgiven! It will make life so much easier as you work to get freedom from the bondage of financial entanglements. If you have someone who can watch this with you, carry on a conversation about the things Dave Ramsey says; push pause often if you want to hear something again, or discuss a comment. However you listen, do it with a full heart, ready for God to break the chains that hold you prisoner!

It probably comes as no surprise that money problems are one of the greatest causes of dissension in a family, or stress on an individual. Can you think of reasons this is true?

Today we begin a new series entitled “Overflow.” With all the advertising thrown at us daily, it’s hard not to get caught up in having the latest version of everything available. However, in doing so, debt accumulates, which in turn causes problems for anyone trying to live the “American Dream.” At the same time, the Bible states that the borrower (the one in debt) is a slave to the lender (the bank, the credit card company, etc.) We are going to work our way through this series, hoping the reward will be financial freedom in our lives.

Live on a written Budget

Five things! Five ways to organize your finances that will eventually result in freedom from bills that seem to come every day. Credit card companies assume a payoff time of thirty years—the length of most mortgages. Meanwhile, you are working many of your hours per week just to pay the interest on those material things you charged—things that will soon be broken or tossed away, or possibly put in a yard sale. Take the first step and write out a budget: one that is sensible, yet gives boundaries for impulsive purchases. But as your finances need to be dealt with, be certain that you have also taken care of the greatest debt you’ll ever be chained by: that of your sin which can separate you from God! If someone came along and wrote you a check to cover all you owe, you would probably fall to your knees and cry. How much greater to know that He who had no sin became sin for you, so that you could [become free from your debt of sin, and] become the righteousness of God (2 Cor. 5:21). Start with being free from that debt, and then move to your finances.

Memory Verse: Hebrews 12:1: “Therefore we also, since we are surrounded by so great a cloud of witnesses, let us lay aside every weight, and the sin which so easily ensnares us and let us run with endurance the race that is set before us.”

There are many verses that need to be read in today’s study, helping you realize God cares so very much about the way you handle money! He has told us that the love of it is the root of everything that is evil; He has also told us that He wants us to be good stewards of what He has entrusted to us. Take extra time on www.Biblegateway.com or www.blueletterbible.org, and study on your own some of the many examples that are written for us to learn to manage our finances well. He wants us to have life, and have it more abundantly!

If you can, attend Thomas Road Baptist Church and hear for yourselves the ways in which you can get financial freedom! Be sure to search out the study notes each week as well. May God bless you!