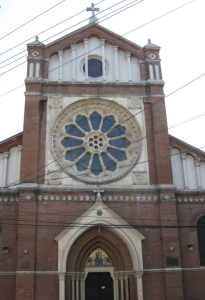 The church sat right on the street, beckoning any who walked by to come inside, sit in the cool air, relax and get calm. Not her! There was no way she was going to enter a church again in her life. All that it stood for was a lie, she was certain of that. For a second, as she walked past the glass windows, she saw her reflection; it took her breath for just an instant. Not that she didn’t know what she looked like, but goodness, that was a sour-faced middle-aged woman looking back at her. How can you feel fifteen or twenty inside looking out, and yet the evidence shows you’re getting past the blush of youth? She hurried on.

The memories, oh, do they never end? How many decades does it take for them to stop overwhelming you? The church had re-opened a cavern where blackness in her soul was usually kept locked. The old questions came flooding back. What must it be like to have been raised by a mom and dad, with happy siblings, with love in the home? To come inside and know that everything bad was being held outside because the door had shut? She had had that for a little while, but the loss of that life still affected everything she did.

She had to sit on a bench for a moment, because she could feel the heaviness of those old memories begin to suffocate her–as they did every once in a while. Breathe. It was like a movie you’ve seen too many times, and it won’t quit. Her mother and father had tucked her in, but they hadn’t gone to bed; there was no yelling, nothing to indicate everything wasn’t good within her family. But when she woke in the morning, Dad was gone, his clothes were gone, his car, and Mom was crying as if she’d never stop. An aunt came by to take her to school, but she could hardly concentrate, wondering what had happened. They were a great family! She was her daddy’s Princess–he always said so. He bragged on her, held her, took her for walks, bought her presents, took her to church–he loved her. He had taught her about God! Now he was gone, and without saying goodbye. The pain was too great to understand.

She worked through the problem: Mom was still there, and Grandma and Gramps, but she could see they were hurting just like she was. Eventually Mom told her the truth: Dad had found another family, another woman to be his wife, and he had left. The woman had children: that meant he would have a new princess, and the tears from the pain of that worked their way out until she was sobbing as if she could never stop. Everyone was still the same, but Dad wasn’t there anymore. And the conclusion she finally came to gave a target for her anger and hate: God was the one at fault, for He could have stopped him. If there really was a God, especially one who loved children, He would not have let Dad go. So, either there wasn’t a God at all, or He didn’t love, because He didn’t stop bad things from happening. She was so young, but she shut her heart that day, and it had never been opened again.

Now, as she sat on the bench, the memories slowly began to ebb, just as they always did. She had reached the same conclusion as decades before. The idea of a loving heavenly Father was a myth for weak people, and she hated Him. She didn’t think about the paradox of hating someone who didn’t exist–she just knew she hated Him. She is one of millions who can’t get past the hurt to understand that God has chosen to give people the free will to make bad choices, and the innocent suffer. Would that she had turned to a Bible, and started writing down all that is said about God, His patience, His love, and how much He hurts when sin and Satan triumph over good. How much Satan has gloated at the hate in the heart of the child who has become a woman. And how ready God is to take her in His arms, and sooth away the pain, and heal the heart.

Sunday, May 21, the congregation at Thomas Road Baptist Church heard from the Scriptures as Jesus stated who He is. To believe that He is, you have to hear about Him, either through someone telling you, or reading about Him. To reject Him without checking any of the evidence is not even giving Him a chance. How about clicking on the sermon link, http://www.trbc.org/sermon-archive, and hitting play on “Not My Jesus: Who Did Jesus Say That He Is?” Join Charles and the choir from LCA as they lead in worship, then listen to the message as Jesus emphasized His deity–to men who hated Him with a hatred so violent they were going to take His life. Grab your notebook, a cup of coffee or tea, and sit back, join the worship service, and then do the study below. Without a doubt, you know someone who is intimately hating Jesus Christ because they have been hurt. They badly need Him back in their life. You may be the one God has chosen to help them!

Many people are skeptical of facts presented to them unless they can see for themselves they are hearing the truth. Can you give an example from your own life?

This week we continue to look at what the Scriptures say about Jesus Christ: that He is, indeed, God, who left His glory in heaven to come in the flesh to the earth. We have looked at the doubts surrounding His being the only begotten Son of God, even when He Himself declared that He was the Messiah. Let’s study what Jesus said about His deity to determine if He was a fraud, a prophet or whether “truly, this Man was (is) the Son of God!” (Mark 15:39).

The Light of the World

One of the greatest debates in all of history is one simple question: is Jesus Christ who He claimed to be: the Son of the living God? If a person will read the Bible, making notes of the facts it presents, they will find that it states He left heaven to be born of a virgin as a baby, who was fully God and fully man, who grew to adulthood to take on a ministry, healed every kind of disease, raised the dead, taught, lived a sinless life in order to pay the penalty for sin for any who would accept the free gift of grace, was crucified, buried and rose again; was seen by many witnesses after the resurrection, and returned to heaven to wait until it is time for Him to return for believers. That is a lot of facts to reject! Especially so, considering there were witnesses to almost all of it. And yet, people want proof. The Pharisees and Sadducees had followed Him as He did miracles, but they still asked for a “sign”! (Matt. 16:1). As we learned early in this series, no true historian rejects the evidence that Jesus lived. But was He the Son of God, a good man, a prophet, or a fraud? The biggest reason unbelievers reject Him is because they cannot reconcile that He is love, and yet allows evil to exist—or at least to touch them! But proof—which is something that is seen—is not faith, and “without faith, it is impossible to please Him, for he who comes to God must believe that He is, and that He is a rewarder of those who diligently seek Him.” (Heb. 11:6). In the final analysis of a study of Jesus, it comes down to a decision: will the reader believe that Jesus knows who He says He is—the great I AM—or will they reject Him because life has dealt some hard blows? The biggest proof there will ever be is a wretched soul who turns their life over to Jesus, and sees a new life emerge. What more proof could anyone ask than the complete healing of a soul? Do His bidding: seek those who are lost and introduce them to the Savior!

Memory Verses: John 8:12: “Then Jesus spoke to them again, saying, ‘I am the light of the world. He who follows Me shall not walk in darkness, but have the light of life.’” through whom also He made the worlds.”

Study: Take some time at home to look up passages on “Light,” and find out how many times Jesus is spoken of as the light. Go to www.biblegateway.com or www.blueletterbible.org and find passages that will make the study on Jesus come alive for you! The deeper you go, the more you will want to learn!