The grandkids (girls, but who’s checking except folks in Wisconsin) came running in from the pool yesterday, sure a “monster” was beating on the outside of the high pool fence. The wind was blowing about 30 mph, enough to shake leaves out of a summer tree and beat branches against wood. That knowledge didn’t phase them: it was someone on the outside, probably a big person wanting to eat young girls.

For some reason, I thought “boogey men” had disappeared years ago. With the Super Heroes becoming bigger, better, more powerful, able to climb skyscrapers, and stretch their bodies to unbelievable lengths, I assumed no one feared giants anymore. Wrong. Perhaps I needed the girls’ perspective to realize that we all have monsters–or giants–in our lives today. They hold us back from doing things we used to love, perhaps from taking that adventure we’d like to enjoy. Holding us back from “seizing the day,” or enjoying life as we live one day at a time.

As Jonathan Falwell preached on David and Goliath Sunday, August 6, he pulled out lessons we all can glean from David’s courageous stand against a giant who was possibly twice his height, and certainly three or four times his weight. We usually can’t stand against someone our own size who wants to take us down, let alone a Goliath. 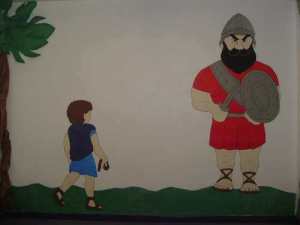 Has it ever occurred to you that we all have “Goliaths” in our lives? Whether they are people who are trying to destroy us emotionally because they are adult bullies–or not taking any responsibility for their evil deeds–or a group who belittles us in order to build themselves up, they are a giant to us. Perhaps it’s not a person, but a circumstance: maybe you’ve had a doctor’s report of a terminal illness, your finances have gone down the tube, or loved ones engaged in spiritual warfare from paranoid, demon-controlled enemies. Whatever the attack, we all have our personal giants. Fear is a natural outcome to listening to the jeers of those against us. A quote by Marshall Jones, Jr. lays it out for us: fear is the state we are in, courage is how we want to exhibit in that state. For those of us who love God, the good news is that we have a hope and a courage that those people, those circumstances, or those trials don’t have, and which cannot be taken away from us! Our trust is in the Lord our God, and His mighty hand will suddenly and efficiently bring an end to the harassment of the wicked. Day after day Goliath taunted the soldiers of Israel. But God will slay our giants if we just step aside and trust Him fully. “Some trust in chariots, and some in horses: but we will [trust in] the name of the Lord our God. They are brought down and fallen: but we are risen, and stand upright.” (Psalm 20:7,8). David’s trust in God was overwhelming! May ours be as great when faced with enemies of God!

Get your Bible, your notebook, and something you love to drink, and watch the sermon from this past Sunday. Go to http://www.trbc.org/service-archive and select Flannelgraph of Faith: Facing the Giant. Spend the first moments in worshiping with the praise team and choir, and sit back and enjoy the service. Then scroll down to the sermon study and delve into the lessons you learned, taking down those giants one by one, giving you a life of freedom from situations or people who want to see you fail. Slay those giants!

Flannelgraph of Faith: Fighting the Giant

If you spend more than a few moments with someone, you usually will learn they are fighting some sort of “giant” in their life, whether it’s physical, spiritual or emotional. Can you think of an example? Have your notebook handy and write your answers if you’re not in a group where you can share.

We continue our series this week, looking at the characters we learned about when we were children, using the decades-old idea of a flannelgraph. This week we are looking at a story familiar to almost everyone: that of David, the youth of Israel who had the courage to take a slingshot and a stone, killing an enemy giant, Goliath. We are looking for deeper lessons inside this piece of history. As we re-examine this story, we want to find principles to look for the giants in our own lives, and use David’s example to help us slay our “Goliaths.”

Read 1 Samuel 17:1-22 to get a background on both the Israelites who were preparing to fight the enemy Philistines, and David, the youth from Israel who was sent on a mission by his father.

The Greatest Challenge in Life is Rarely the Actual Challenge:

Facing Opposition While Doing God’s Will Should be Expected

Depending on God’s Power in the Face of Your Biggest Giant is Always a Winner:

What a marvelous gift, to have a trust so great in our Holy God that we will go up against the most evil giant we can encounter!  David, even though young and surrounded by much older men, found himself angered as he saw the fear paralyzing the soldiers. His amazing faith in God, developed through his experiences in the wilderness watching sheep and worshiping his Creator, left him stunned that others would take no action against someone insulting the Living God. It would have been so easy to give in to the jeers of men, and run for home. But David was convinced in his soul that God would win the victory for him, and failing to act was not an option David even considered.

How about you? Have you let the giants in your life dictate your choices? They can be your friends, criticism, your appearance, a disability—so many possibilities. Some physical traits perhaps were given to us by God to make us stronger! Think for a moment of those you know in your church who are such a great example of being strong for Christ, though weak or physically scarred by the world’s standards. Follow David’s example and work on trusting God with everything you are, so that you can eliminate the giants that want to take you down and cause you to be incapable of serving Him. You will soon be able to tell you are succeeding: whenever you are doing God’s will, you will have opposition. You will never have spiritual warfare unless you are doing something spiritual!

Memory Verse: I Samuel 17:47: Then all this assembly shall know that the Lord does not save with sword and spear; for the battle is the Lord’s, and He will give you into our hands. (NKJV)

Ask Yourself: Are my giants destroying my effectiveness as a Christian? Am I giving in to the persecution and fear, or am I trusting without question? How can I trust more fully? Am I praying to God for more faith?